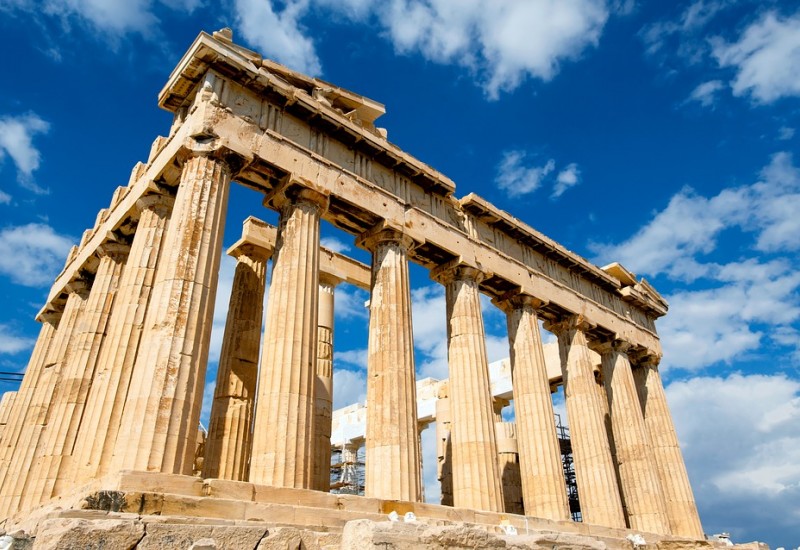 How’d We Get Here From There?

All world religions seem to have many of the same tenets. They teach that
we are all sinners and we must atone for them, that we must accept a moral
code as a guide to our actions on faith, that a fundamental principle of
morality is to be your brother’s keeper. As far as I know, all religions deal with
morality, but there was one culture that knew a moral code is derived from
two other branches of philosophy: the nature of reality and the nature of man.

The ancient Greeks developed philosophy, science and mathematics.
Aristotle taught that our natural world is real and physical, that our senses
could identify the facts of reality. He defined human beings as rational animals,
emphasizing reason as a characteristic of human nature. He taught that a well
lived life, a happy life, requires living according to reason. He taught that
rationality is an activity distinctive to human beings and that its exercise is the
supreme good. He considered morality a practical discipline and it was the
responsibility of each individual. He defended individualism and the institution
of private property. It’s not widely known, but should be, that Western
Civilization started with the Ancient Greeks – in particular Aristotle. It’s been said,
“Never have so many owed so much to one man.”

So, how’d we get here from there?
The disappearance of Greek philosophy, their advocacy of reason and individ-
ualism, led to the fall of The Roman Empire and the advent of The Dark Ages.
It is the Muslims, who discovered the Greek philosophers via the Byzantine
Empire, that kept Aristotle’s work alive. At one point Bagdad had the largest
libraries in the world. And under the influence of reason they made significant
advancements in science, medicine and mathematics. But along came al-Ghazali,
a Muslim philosopher considered the single most influential Muslim after
Muhammad, who vehemently rejected Aristotle, and taught that Muslims must
be Muslims and put their faith above all else. Al-Ghazali became known as a
renewer of the faith. Eventually the libraries of Bagdad were burnt to the
ground. (Today’s Muslims should learn from their own history.)

But the libraries containing the Greek philosophers did survive in Spain.
When the Christians defeated the Moors in Spain, they discovered the works
of the Greek philosophers. Thomas Aquinas, an immensely influential
philosopher and theologian in the Catholic church, discovered Aristotle. Thomas
Aquinas brought Aristotle’s ideas back into the western world – emphasizing
reason, an objective reality and morality – that exercising one’s reason was the
supreme good. And what follows – The Renaissance – the rebirth of reason.
When men such as Galileo and Newton apply reason to the physical world,
science is reborn. People begin to understand what? – they begin to under-
stand that they can understand the world around them through reason and
the Age of Reason is born. People began to understand that they could take
care of themselves – they could understand reality and what it could be made
to do. They began to question authority – What do I need you for when I can
think for myself. The Enlightenment is born. An enlightened people demand to
be free of authority – they demand freedom. And capitalism is born. Throughout
the western world people know they have a right to their life, a right to their
property and a right to pursue their own happiness. They have accepted
Aristotle’s view of morality – that the exercise of man’s reason is the supreme
good. They know that to achieve happiness they must be guided by reason, must
be productive and honest in their relations with others. They become thinkers,
inventive, hard working and ambitious and bring about an Industrial Revolution
that gives us a standard of living that no one could have imagined.

So where are we now? One does not need to be a keen observer of today’s
culture to know we are in trouble. Capitalism is under attack. I’m all for clean air
and clean water but the environmental movement is about more than that – it is
against the Industrial Revolution. Egalitarianism is on the rise – the idea that we
are all equal. Under capitalism we are all equal under the law, but we are not all
equal morally. Some of us are rational; others are irrational whim worshipers.
Some are productive; others are lazy bums. Some are honest; others are thieves.
Some are rich; others are poor and those rich capitalists must be forced to share.
In my opinion, egalitarianism is an attack on morality. Cronyism is on the rise. Bill
Gates made billions on the free market. That’s great. He did it by making my life
better. But more and more are getting rich through political pull, special favours.
Emotionalism is taking over from reason. What little thinking is done is done to
justify emotions. Then there is altruism, the moral code that demands we take
care of everyone and thus we get more and more socialist policies. Environmen-
talism, egalitarianism, cronyism, emotionalism and altruism – all out to undermine
capitalism. Is it any wonder that no matter what the problem, real or imagined,
capitalism takes the blame?

I’m not a philosopher, nor have I studied philosophy. But as far as I know,
Emmanuel Kant (1724-1804) is the philosopher that’s mainly responsible for the
current state of our culture. I assume he can be considered to Western culture
what al-Ghazali was to the Muslim culture.